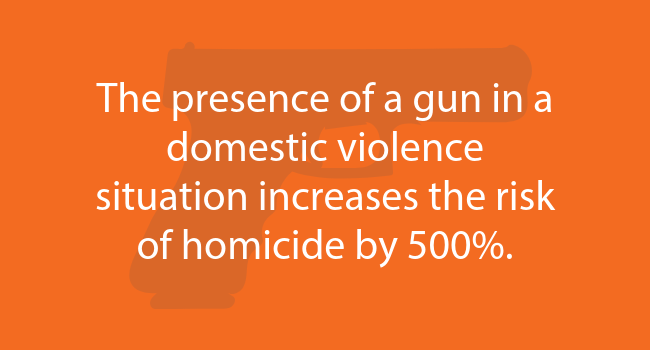 A woman’s risk of homicide increases significantly when her abuser has access to a gun. Each month, an average of 52 American women are fatally shot by their current or former partners. Even more are injured. BIPOC women, especially Black, Native, and Hispanic women, are at even greater risk of being fatally shot. This is due largely because they have a harder time accessing services and support that can keep them safe.

While domestic violence survivors face the greatest risk, abusers may also target family or community members. More than half of mass shootings in the last ten years also claimed the life of the gunman’s partner or family member.

Gun fatalities are only part of the problem. Abusers also use guns to threaten, intimidate, and control their partners. More than 4.5 million American women have had their partner threaten them with a gun. This type of abuse, also known as coercive control, can have a dramatic negative impact on a survivor’s mental health and well-being. Women who fear being shot are less likely to fight back or try and leave.

Washington state has been a leader in passing common-sense gun laws that keep guns out of abusers’ hands. In 2014, the state banned abusers from accessing guns whenever certain types of protection orders are in place. When the state lacked the resources to remove guns proactively, the City of Seattle and King County partnered to create the Domestic Violence Firearms Enforcement Unit in early 2018. The unit, which is responsible for quickly and proactively confiscating guns from abusers who have lost the right to have a firearm, seized 466 guns in 2018 alone.

Earlier this year, Washington state once again moved to make it more difficult for abusers to have guns. Under the new law, if a survivor files an extreme risk protection order, it would require the immediate, temporary removal of firearms belonging to the person named in the order. In states like Washington, where there are robust gun control, intimate partner homicides dropped by 56%.

We still have work to do. In Washington state, funding continues to lag behind policy. At the national level, the Violence Against Women Act, which is up for renewal in Congress, proposes to fix the “boyfriend loophole” to expand domestic violence related gun laws to including dating partners.